How do you make it snow in Tampa Bay? Big money, big machines and a guy with a dream

ST. PETERSBURG — In the heart of the snowstorm, Bob Valenti wore a polo shirt.

It was cold as a walk-in freezer inside the Snow Magic machine, and cramped as a submarine. It sounded like hanging out inside a vacuum cleaner bag.

He climbed a frigid ladder, past instructions in Japanese, past readouts of pressures and levels, and watched the big turbine slowly churn. A conveyor belt moved what appeared to be white cornflakes.

Valenti reached in and shoveled a handful into his mouth.

"See, you can eat it. It won't hurt you," he shouted, shivering as a big crumb melted on his shirt. "We don't put any additives in our snow, just water."

Is that even cleaner than real snow, you think, Bob?

Valenti has got to believe.

He believed he could bring a better snow event to St. Petersburg. He believed people wanted it. This belief led him on a three-year journey to open Snow Blast in the parking lot of Tyrone Square mall, with snow slides, snowball throwing and all the snow merriment you could imagine. 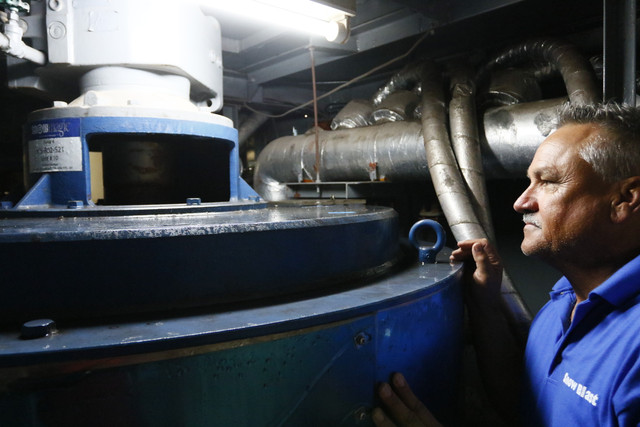 This belief also led Valenti, a St. Petersburg Parks and Recreation supervisor who makes $65,000 a year, to take six weeks of vacation and open multiple credit lines totaling $100,000 to pay for the event.

Eleven of his colleagues believed in him, so much that they donated hours of time and expertise to help organize, build and run it. Two investors also believed, putting in $50,000 each.

They believe they might all get paid some day, if the event doesn't lose money. Valenti has promised everyone the same cut he'll get.

Valenti must believe this is real snow, or at least the best snow humans can make, because if 15,000 people don't pay $25 to play in it before Snow Blast ends on Jan. 7, he might lose his shirt.

Snow is magical, especially in the minds of children and adults who have never had to shovel it. This is why people in the Tampa Bay area still talk with wonder about 1977, the last time the region got a light dusting of snow.

It's also why there's an industry and a craft around fake snow.

Dropping something white from on high is the oldest method. When snow falls on stage at Blake High School during Nutcracker performances, it's Wizard Snow, recycled plastic shavings sprinkled from a muslin hammock with slits. Rock the bag faster and it snows harder.

Filmmakers first covered sets in cotton, a serious fire hazard. Shredded asbestos was used on other sets. Movies later used painted cornflakes, then the stuff inside fire extinguishers mixed with sugar, which is what you see in It's a Wonderful Life.

Some snow is foam, blown through a filter so the "flakes" are authentically tiny and white, flurrying and floating on the way down. Francisco Guerra, a Cuban-born magician living in Florida, invented this "evaporative snow" for Santa's Village in Miami in 1995. His snow patent blossomed into a portfolio of businesses ranging from drink coasters that test for date rape drugs to helicopters, and a net worth over $100 million, said a spokesman for his company, Snowmasters.

Subscribe to our free Top 5 things to do newsletter

It's the method used at the Shops at Wiregrass in Wesley Chapel, the Christmas Trail in Plant City and the 3-mile Jingle Bell Run along the St. Petersburg waterfront. It requires a blower and jugs of snow fluid, often manufactured in equally snowless Louisville, Ala.

The allure of a white Christmas has led to Attatoy "plush indoor snowballs," dry and light, but "crunchy and squeezy" like real snow. Insta-Snow powder is $9.45 on Amazon and will "erupt" into 2 gallons of loose, dry snow when you add water. The super-absorbent polymer is also useful for cleaning up chemical spills.

But if you want to slide down it, throw it, feel cold in it, you've got to freeze water. Ski resorts started making snow this way in the '50s, first by busting up regular old ice and spreading it over the slopes, later by spraying water and letting it freeze in the frigid air.

St. Petersburg's Snowfest and Largo's Let It Snow use finely chipped ice. Many commercial ice vendors provide this service as a side gig, some who bristle at people calling it "chipped ice."

In reality, it's never as powdery as natural snow, less like dainty crystals and more like ungraceful chunks. But in Florida, it's what we have.

Bob Valenti is not necessarily the type you'd expect to put in 40 years at a blue-collar, government job.

He's 58. He has been with St. Petersburg Parks and Recreation since he was 18, working in recreation centers and organizing events. He had the idea for Mud Wars, and was the driving force behind TASCO, the city's Teen Arts, Sports and Cultural Opportunities Program.

His boss, recreation and programming superintendent Richard Craft, said his strength is new ideas. Craft is aware Valenti has a side project, but isn't all that familiar with the details. What he does on vacation is his business.

"I love working for the city of St. Petersburg, and I really believe in what Parks and Recreation does," Valenti said. "But they're also constrained by certain things, like doing events for the masses."

At the city's annual Snowfest event, he said, kids wanted to play longer in the snow but couldn't because of lines. He looked at the "chipped ice." He knew he could go bigger and better.

"I'm kind of a visionary," he said. "People say I dream too big, but I visualized this and I made it happen."

After this, Valenti plans to produce an epic movie, a science fiction thriller based in part on the collapse of the Sunshine Skyway Bridge and the Spaniards landing in Florida. He dreams of opening an event center where families can compete in a huge jigsaw puzzle competition.

Valenti can talk about his projects for hours, and when he does, his mind goes to his father, a longshoreman with an eighth-grade education who "worked every day of his life" and could play any music he heard by ear on piano.

He thinks about growing up on government assistance in a 25-story housing project in the Red Hook area of Brooklyn. It was a big Italian family with big Sunday dinners, but he remembers that gritty neighborhood being his entire world.

They certainly had snow, so much it was mundane, but they never went on a trip, or saw a beach. He didn't eat at McDonald's until he was 14, and when he did, it blew his mind.

This is why he dreams of being able to give away free Snow Blast tickets to children who can't afford them. Seeing something new and wondrous like snow can be a turning point for a kid from a rough neighborhood, like the first time he saw St. Petersburg when his family moved here.

But Snow Blast is a business, and right now all those dreams are riding on his business recouping a small fortune. There's some pressure, he said, but no fear. The benefit of growing up poor, he said, is you're not afraid to lose it all.

"If it doesn't work out, I'm going to owe some money," he said. "Okay. But there's nothing that can happen that can take me lower than where I've already been."

Here's what it takes to make it snow in a mall parking lot in Florida.

Valenti started researching in 2016. He later took his wife, a Pinellas County teacher, and his kids to Hawks Nest, N.C., to see natural snow. His Floridian sons, 11 and 18, were so excited to find a paltry inch in the parking lot they laid down right there to make angels. He noticed how many cars had Florida tags.

He formed a company, the Idea Engine. He found his snow vendor, Snow Magic, at an amusement park trade show in Orlando. He wanted the best "real snow," and Snow Magic claims they provide just that. Renting their machine for the season cost $150,000.

They bought used snow slides from Busch Gardens, but only realized how big they actually were when they showed up. They didn't have nearly enough trucks to take them away.

"We really didn't know what we were getting into," Accola said.

They postponed the winter wonderland a year.

The Snow Blast tent alone required six trips to the permitting office and cost $50,000. Valenti needed millions of dollars in liability insurance coverage. The special flooring, which allows water to drip through, cost $50,000. The 32,000-pound Snow Magic unit had to be shipped by freighter from Guatemala, then got held up in customs.

They needed 10 days to make enough snow to open. The machine arrived nine days before opening day. They started blowing snow from the 100-foot hose around the clock, spending 36 hours straight inside the tent.

Maintaining the snow means keeping the machine running 24 hours. It's hooked to a fire hydrant, which the city has put on a meter, which means he's paying his employer to use the water. The Snow Magic machine needs 15 gallons a minute along with 250 gallons of diesel fuel a day.

There's a team of seasonal employees to pay, including someone to work the hose all night long, alone, blowing fresh snow over nearly every inch under the 10,000-square-foot tent for $15 an hour.

When it's all over, Snow Blast will have cost $400,000, Valenti said. As of last week the event was way behind where it needs to be to even break even.

Twelve days before Christmas, Valenti stood near a man-made snow drift, holding a power drill, a bottle of Gorilla Glue and a hunk of plastic molding.

There were no paying customers, just a couple of young employees sledding down for a test run.

Then the door opened and Scarlett Lang, 5, came running in with the blinding sunlight, followed by her parents, Nadia and Ricky Lang, and her baby brother, Jack.

Valenti perked up. "Are you ready to go on a ride?" he asked, guiding the family toward the inflatable tubes.

The family rode down the slope, threw snowballs at a wooden snowman and tromped around in the snow near the Candy Cane Castle, taking lots of pictures. They had driven an hour from Valrico.

Nadia Lang watched as her daughter scooped snow in a bucket.

"She thinks it's real, so that's a good thing."

Up next:Halloween Horror Nights after Labor Day? Universal Orlando is doing it.