Mulder and Scully find someone they've been looking for and more.
By Caitlin O'Conner
Published Feb. 1, 2018

The X-Files delights in keeping viewers on their toes, asking dozens of questions and only half-answering half … only to turn around a few episodes (or seasons) later and challenge those same notions. Herewith is a list of things we learned in Season 11, Episode 5, "Ghouli," which starts off as a monster of the week episode seemingly inspired by the Slenderman stabbing in Wisconsin but quickly reveals that there's more to this than meets the eye. Herewith 28 things we learned in "Ghouli."

The opening credits tagline is "You see what you want to see."

Scully is still having visions.

This latest vision leads her to an open X-File, where two teen girls in Norfolk stabbed each other on a boat called Chimera. They were searching for Ghouli, which you can actually check out online.

The girls have seen the same vision as Scully.

The Van De Kamp house, of course, is the one from Scully's vision. Both of the Van De Kamp parents have been shot and are lying dead on the floor. Upstairs, a dark-haired boy — Jackson — is also lying dead, possibly of a suicide.

The local cop thinks Mulder is "looking for answers to questions no one else is asking." Story of his life, bro.

The boy is on anti-psychotic and anti-seizure medication but has been off of it. Scully speculates that he's troubled.

Two agents have been following Mulder, and won't say where they're from. Mulder speculates they're from the DOD, which turns out to be correct.

Needing answers as to whether Jackson is actually her lost son William, Scully performs a DNA test (it will be a positive match). She then gives a heartfelt monologue to the boy in the morgue about why she gave him up to protect him and more.

The boy, who will be revealed to be William, of course, then sits up out of the body bag as soon as Mulder and Scully have left.

While he's escaping the morgue, Scully has another vision. She picks up the windmill snowglobe, wondering whether she is sending the message to William or vice versa — and then flashes back to the vision from last season's finale, "My Struggle III."

Of course, now everyone realizes the body has since disappeared. This has Scully convinced that it's William and that he wants her and Mulder to find him. Mulder, for once, is the skeptic.

Scully runs into an older man who cracks the windmill, asks about it and tells her, "Don't give up on the bigger picture."

The DOD swoops in just as Mulder and Scully discover the boy's computer with DOD files and Ghouli connections.

Skinner is still working with the Smoking Man, who is in his office at the FBI talking Project Crossroads when Skinner speaks to Mulder.

CSM thinks "Mulder is close" and will lead them to what they're looking for.

Skinner warns Mulder to drop the investigation and details a long government program to mix alien and human DNA to create hybrids, Project Crossroads. It was declared a failure because no one could predict what traits the subjects would inherit and defunded 15 years ago. (William, for what it's worth, is about 17.) William/Jackson Van De Kamp was one of the test subjects.

Skinner acts surprised to find out that Jackson is William.

Scully speculates that the "My Struggle III" vision was not necessarily the future, but some other sort of message from William, just like the Chimera vision that led them to him now.

Mulder knows Jackson didn't kill his parents because of the blood spatter patterns. Clearly he has been watching my fave, Forensic Files.

Harkening back to "revelations" in this season's premiere, Mulder tells Scully "through the Smoking Man, you were an unwitting participant in a eugenics program known as Project Crossroads." He still refers to William as "our son."

Mulder believes William created a "false reality" in which he was dead in order to hide from the DOD and then themselves. 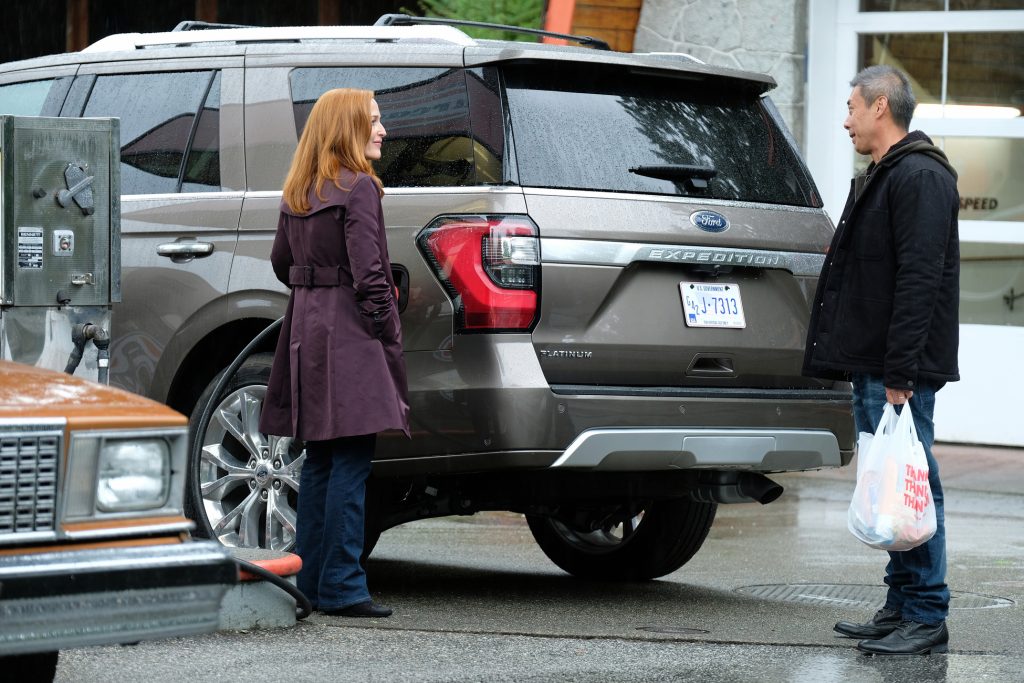 Twice Scully meets a mysterious man who may actually be William in disguise. (Fox)

William admits to the girls that he projected the Ghouli into their minds, a power he is just learning to control. It started with the visions in his seizures. He has been sharing it mentally with “this woman … maybe my birth mother.” Unexplained is how he knows this but did not recognize Scully as she was monologuing over his body in the morgue.

William then uses this ability to duck the DOD agents, causing them to shoot one another when they see Ghouli, and then to evade Mulder and Scully.

Mulder hugs Scully when they realize that William has escaped them.

Scully encounters the older man again, who tells her, “The world’s about to change” and quotes Malcolm X. Of course, they then realize this was William, confirmed by gas station surveillance cameras.

ALSO IN THIS SECTION