CHICAGO — OF Mallex Smith played a role in two of the Rays' toughest losses, unable to make what could have been game-turning catches. Monday, using his bat and his speed, he had a big hand in their much-needed victory, rapping a career-high-matching four hits (a homer shy of a cycle) and stealing two bases.

"He really ignited us quite a bit offensively," manager Kevin Cash said. "He can hit. He had really solid at-bats. He did most of his damage with two strikes. Then he gets on base and creates some havoc. A lot of positives for Mallex today."

Acknowledging Sunday that he knows he has to play better to stay in the majors, Smith seemed to be motivated Monday as soon as he stepped on the field.

"Definitely," he said. "Things happen. You've got to turn the page and be ready for tomorrow. That was the plan today. … It was one of those days that I put the ball in some really nice places that allowed me to use my wheels."

His game wasn't all good. He was thrown at the plate once on a planned contact play when he did what he was supposed to, then later when he didn't, making a bad decision to break from third on a pickoff throw to first.

"Just trying to do a little extra, probably shouldn't have," he said. 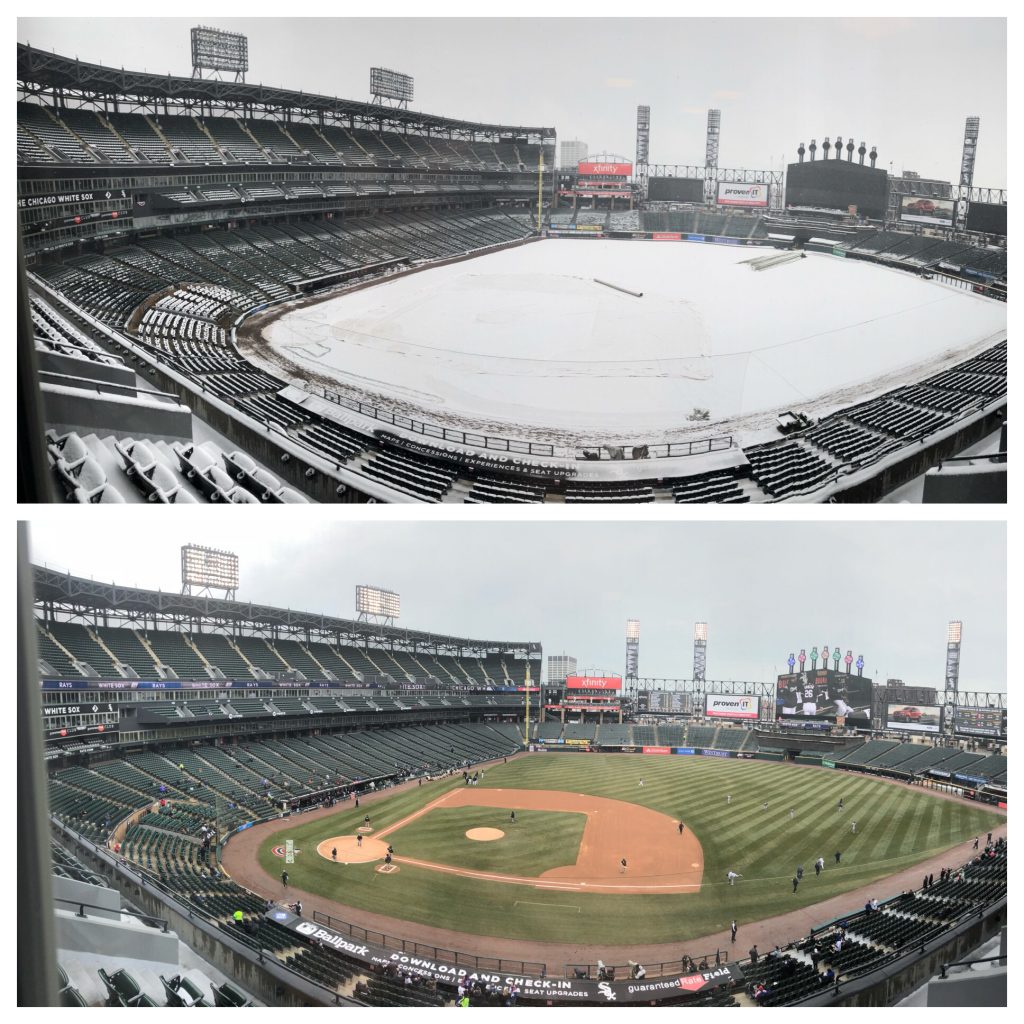 The real stars of the day were Roger Brossard's Sox grounds crew. With two-plus inches of snow blanketing the field by mid morning, it did an amazing job to get it game ready in less than four hours. It used lawnmowers as plows to get the snow off the outfield grass and onto the warning track then carted it away, then turned on the sprinklers, which have 50-degree water, to melt what was left. The game was delayed only 21 minutes to get the field ready. … Though the 35-degree first pitch was second coldest in franchise history (34 on April 17, 2003, at Boston) the Rays seemed relatively unaffected, or just used to it after the cold weather in New York and Boston. RHP Chris Archer threw 102 pitches over 52/3 innings wearing short sleeves, and 2B Joey Wendle stuck to his usual routine of not wearing batting gloves and homered.

Sorry to scoop you

RHP Ryan Weber got word of his promotion during Triple-A Durham's Sunday late afternoon game, so he headed to his apartment to start packing to be ready for his early morning flight to Chicago, figuring he'd then call his fiance and his mom, who lives in St. Petersburg. "I was thinking they'd announce it (Monday) or whatever," Weber said. "And mom called me and she's like, 'Are you okay?' And I'm like, 'Yeah, what do you mean?' She said, 'Well we just saw on the Internet you got called up.' I was like, 'Oh yeah, sorry.' " Weber may have a short stay, brought up to provide some cover for a long relief crew that has been worked heavily. At some point, the Rays seem likely to add a position player to replace injured INF Brad Miller, with INF/OF Micah Johnson a logical possibility.

For a guy who had a crutch at his locker and a walking boot on his painful and swollen right foot, CF Kevin Kiermaier actually was in pretty good spirits Monday morning. That's because X-rays showed there was no break, as Kiermaier had become increasingly worried about in the hours after fouling a ball off his foot Sunday. With a diagnosis of a bone bruise, he is expected to miss only a couple of days, hoping to maybe be available Tuesday. "I'm just kind of hobbling and limping around, not able to put too much weight on it," Kiermaier said. "Hopefully a bunch of treatment today, rest, staying off it. I've got my 'Paul Bunyan' boot on right now, so that will take some of the pressure off everything. It's good though. I was kind of preparing for the worst." Having missed time with a broken right hip in 2017, broken left hand in 2016 and fractures in both hands in 2012, Kiermaier said: "I definitely dodged a bullet with this one because I'm way too familiar with breaking bones."

Milestone of the day

With eight strikeouts, RHP Chris Archer moved past David Price for second on the franchise K list with 1,066, trailing only James Shields' 1,250. Shields starts Wednesday for the Sox against the Rays.

• Miller will need at least the full 10-day DL stint if not longer to recover from what Cash called more of "a traditional groin strain" than the never-quite-defined spring injury. Miller had groin issues last season and had October surgery.

• Announced paid attendance, which obviously includes the no-shows, was 10,377. Best guess by Chicago scribes was about 400-500 in the stands.

• Two-way 1B/LHP prospect Brendan McKay, hitting .556 with five RBIs and six walks in three games for Class A Bowling Green, pitched two perfect innings and struck out four of the six batters he faced in his first start Monday at South Bend (Cubs).

• Tuesday's game is part of MLB's Twitter package, with the White Sox broadcast available online and via mobile devices at live.twitter.com/mlb. (A Twitter account is not required.)