WASHINGTON – Sen. Marco Rubio in a recent letter to the city's mayor restated his support for raising the age for purchasing semi-automatic rifles but the mayor accused the Florida Republican of trying to curry favor with the NRA.

"Stop undermining the safety of our residents just to improve your NRA score," read the response to Rubio's March 15 letter issued Tuesday by Mayor Muriel Bowser.

Rubio's gun bill, first introduced as he was preparing to run for president, would overturn local gun regulations, some of the toughest in the country, and underscores Congressional control of the city.

The legislation hasn't moved but gained notice after the Parkland shooting and Rubio saying during a CNN forum that he supports increasing gate purchase age to 21 from 18 — though he hasn't introduced legislation. (On the state level, the NRA is suing over the age requirement.)

In a letter to Bowser, Rubio said his intent was to bring D.C. guns law in line with federal laws and he notes the city's high homicide rate. "While we differ on how to get there, I appreciate the opportunity to discuss what can be accomplished," Rubio wrote, enumerating some of the post-Parkland measures he's supporting.

Working to add #StopSchoolViolenceAct in the so called “omnibus” bill. If it is, we could see passage of this important law before the week is over. Thank you to everyone who is calling your Senators & members of congress asking that it be included. It’s making a real difference

Bowser, however, sent his letter back like a teacher marking up a paper. 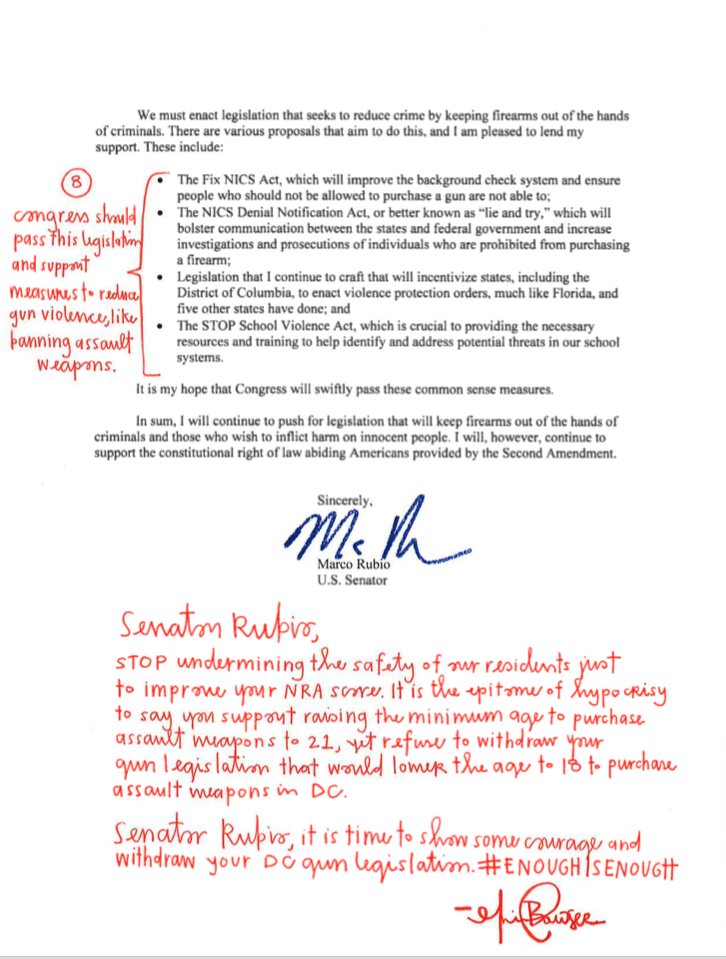