Russia-linked Facebook ads in Florida show an effort to interfere in the 2016 presidential election -- and beyond.
By
Published May 10, 2018|Updated May 10, 2018

That provocation was carried on a June 2016 Facebook ad that depicted a dark-skinned Jesus, head wrapped in a scarf, next to a traditional image of Christ.

Aimed at Facebook users in Florida and other states, it's just one example of thousands of ads linked to Russia that sought to stoke racial and political animosity in the U.S. ahead of the presidential election between Hillary Clinton and Donald Trump.

House Democrats on Thursday released more than 3,500 Facebook ads that reveal the depth of the propaganda effort. Many sought to stir up both sides on issues ranging from guns and immigration to the Black Lives Matter movement and police brutality.

Ads mentioned Trayvon Martin, the Florida black youth who was shot and killed by George Zimmerman in 2012, and sought to emphasize the sexual orientation of Orlando Pulse nightclub victims.

Many of them didn't get much attention. The Jesus ad had only 2,392 impressions and received 269 clicks. But others gained widespread attention, the collective effort at once simple and sophisticated.

While the effort has been known and some ads published before, the cache released Thursday provides new understanding and shows how far it went.

Nationally, more than 11.4 million Americans were exposed to the ads. Many more millions saw content created on Facebook pages set up by the Internet Research Agency, a Russian troll farm, and its operatives, according to House Democrats.

"There's no question that Russia sought to weaponize social media platforms to drive a wedge between Americans, and in an attempt to sway the 2016 election," said Rep. Adam Schiff of California, the top Democrat on the House Intelligence Committee.

"They did this by creating  fake accounts, pages and communities to push divisive online content and videos, and to mobilize real Americans, unwittingly, to sign online petitions and join rallies and protests. Russia sought to divide us by our race, by our country of origin, by our religion, and by our political party."

The trove of ads released Thursday appears to back the assertion that the Russians wanted to hurt Clinton. Some spread rumors about her husband, former president Bill Clinton, or promote lies about her. Several depict Clinton behind bars.

The February indictment linked the Russian outfit to efforts to set up pro-Trump rallies across the country. "Florida Goes Trump!" read a banner promoting an Aug. 20, 2016, "flash mob." The operatives allegedly used a false Twitter account to recruit a real person to dress up as Clinton in prison garb at  rally in West Palm Beach.

The propaganda continued after the election, according to the documents released Thursday.

“Join the event, bring your friends feel safe with us!” read the ad, which targeted people living within 25 miles of Tampa. 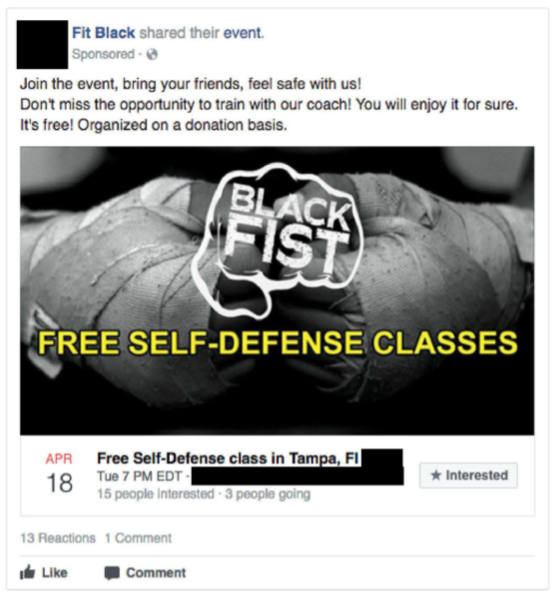 Information from The Associated Press was used in this report.

Up next:Gwen Graham responds to negative ad by group that supports Andrew Gillum