Total spending on Scott’s behalf approaching $12 million vs. virtually nothing for Democrat Bill Nelson.
By
Published May 16, 2018|Updated May 16, 2018

Rick Scott’s campaign this morning released another Spanish-language TV ad, bringing his total spending to more than $8 million in just over a month, an astounding figure, especially when compared with how much Bill Nelson has spent: $0.

It’s the third ad released this week for an overall buy of $3.2 million, and means Scott has eclipsed the $6.5 million in spending Nelson made in his entire first campaign for Senate in 2000.

Seeking a fourth term, Nelson has about $10 million in the bank and has been fundraising as much as he can to store up resources for later. But the yawning disadvantage is becoming a storyline, worrying some Democrats.

Scott has also gotten about $3 million in TV ad help from outside groups, including a super PAC that can take in unlimited sums, meaning spending is nearing $12 million.

Nelson has criticized the super PAC era, ushered in by the Citizens United decision of 2010, but will not disavow their help. He needs it in a big way.

Outside spending in Nelson’s 2012 election against Connie Mack reached $23 million, $9.7 million of which was against Nelson and $6.2 in favor of Mack.

In the 2016 race between Marco Rubio and Patrick Murphy, outside spending topped $50 million, according to the Center for Responsive Politics. Overall spending that year was $110 million.

How much more will the Scott-Nelson battle cost?

So far, despite the onslaught, the race remains very close. 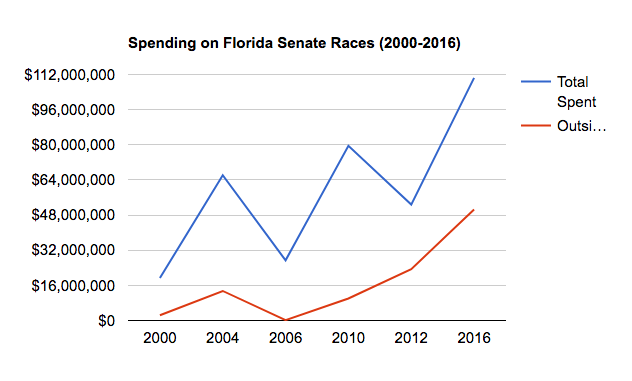 Up next:Marco Rubio continues to rail against Trump’s sudden capitulation to China