WASHINGTON – Gov. Rick Scott will return to Washington later this month and put its money machine to work for his campaign.

The Senate candidate has three fundraisers set for June 28, according to invites obtained by the Buzz, including a lunch hosted by lobbyist Brian Ballard and a dinner at the home of Dwight and Martha Schar.

Mr. Schar is founder of the home building giant NVR and part owner of the Washington Redskins. Admission to the event costs $25,000 and goes to Rick Scott Victory Fund, a joint committee with the National Republican Senatorial Committee. 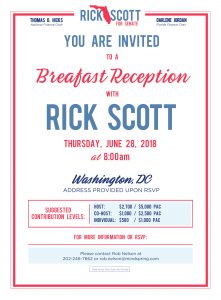 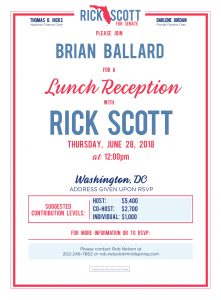 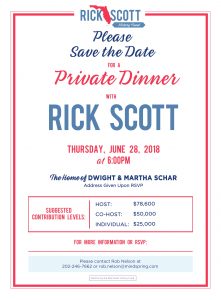 Up next:Rick Scott appears to support Curbelo’s immigration plan, but how would he vote?