Feds: No ‘new or ongoing compromises’ of Florida voting systems

But letter to state warns Russians are a threat.

WASHINGTON — The two federal agencies that safeguard America's voting systems from outside attacks said Tuesday they "have not seen any new or ongoing compromises of election infrastructure in Florida."

Nelson first made his assertion on Aug. 7 in Tallahassee and the following day in Tampa. He said he did so after talking with the two leaders of the Senate Intelligence Committee, Republican Richard Burr and Democrat Mark Warner.

"They have already penetrated certain counties in the state and they now have free rein to move about," Nelson said Aug. 8, but he has repeatedly refused to elaborate on his explosive accusation.

The senator's claims have drawn wide national attention, shifted the tone of his re-election fight with Republican Gov. Rick Scott and rattled county election supervisors as they prepare for a midterm election.

The letter went on to say: "Russian government actors have previously demonstrated both the intent and capability to conduct malicious cyber operations. DHS and the FBI will continue to notify any victim of a successful cyber intrusion into their election network in any jurisdiction nationwide." 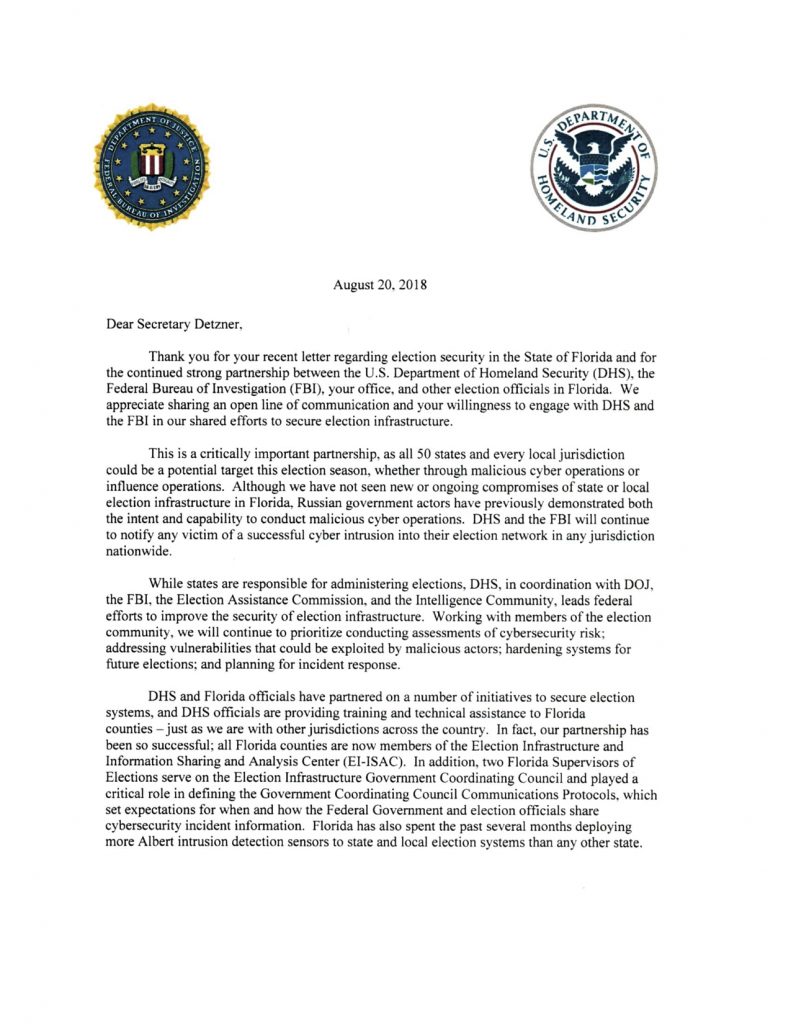 Within an hour of the state releasing the feds' letter Tuesday, Scott's campaign mounted an aggressive new line of attack that questioned Nelson's honesty and accused him to trying to erode public faith in elections in Florida.

"It is irresponsible and reckless that Bill Nelson would attempt to undermine the voters' confidence in their county elections systems by making confusing statements while campaigning and then walking away with absolutely no explanation," Scott's campaign said. "Bill Nelson has either been deeply confused or very dishonest — and an alarming possibility suggests that he is both on this issue."

The suggestion that Nelson is "confused" mirrors a strategy used by other Republican groups to question the 75-year-old senator's mental fitness to serve for another six years in Washington.

Nelson has held to his position despite fierce opposition from Scott as they battle their way through the nation's most competitive and expensive U.S. Senate race this year. It is certain to be the most expensive Senate race in Florida history, and will help determine which party controls the Senate, possibly for years to come.

A spokesman for Nelson, Ryan Brown, said: "In my opinion, there's nothing in this letter that contradicts what Sen. Nelson said he was told a few months ago, and what he and Sen. (Marco) Rubio have tried to warn about in order to guard against Russian meddling in our elections. The governor of Florida has a security clearance and could have quickly and directly received information, answers and posed any questions instead of engaging in these confusing and partisan histrionics of the past week."

Brown did not immediately respond to follow-up questions posed by the Times.

On Friday, NBC News reported that, based on three unidentified people "familiar with the intelligence," there was a basis for Nelson's claim. Nelson shared the report on Twitter.

Scott, who has a federal security clearance, also talked by phone on Tuesday with DHS Secretary Nielsen. It was believed to be the first time the two have spoken since Nelson made his hacking assertion two weeks ago.

It was the only official event listed on the governor's daily schedule. Scott's office released no information about their conversation.

On Monday evening, the Tampa Bay Times sent Scott's office a series of questions, including why Scott has not already taken advantage of his oft-touted alliance with President Donald J. Trump's administration to clarify the issue of alleged Russian infiltration.

Scott's office has not yet responded to the Times' questions.

Okaloosa County Supervisor of Elections Paul Lux praised the federal agencies for a "forthright response." But he added: "It doesn't mean we become complacent and stop looking to make Florida's elections as safe as possible."

He said counties appreciate the feds saying they will notify any victim of an intrusion.

"They're not going to stand by and not notify us if we're affected," Lux said.

Nelson said he and Sen. Marco Rubio were implored by the heads of the Senate Intelligence Committee to write a letter in July to county election supervisors, warning them to be vigilant and to seek federal resources. But in his public comments to the Tampa Bay Times, Nelson went a step further, saying there was active meddling.

"Bill Nelson's confusion has caused chaos and he should be transparent with the state, Florida voters and the hardworking election supervisors about his unfortunate decision to undermine voters' confidence in our election systems," Scott's campaign said.

While Scott's campaign hammers Nelson, the governor's office has sought to shape a coordinated message to the public, also questioning Nelson's credibility, through all 67 county election supervisors, 66 of whom are elected by voters (only Miami-Dade has an appointed elections official).

On the day Nelson's claim of intrusion broke, Detzner's office emailed its initial statement to all supervisors, noting that the Department of State "has received zero information from Senator Nelson or his staff that support his claims," and no information from federal authorities.

The email added: "If Senator Nelson has specific information about threats to our elections, he should share it with election officials in Florida."

The email, from Detzner's spokeswoman, Sarah Revell, said: "If you get asked for a comment from the media, please feel free to reiterate some of the points in our statement so that we have a uniform message across the state."

As of Tuesday, more than 1.1 million Florida voters had cast ballots in the state's Aug. 28 primary election.

Early voting will continue through Saturday in all 67 counties, and will extend to Sunday in 14 counties.

Up next:Andrew Gillum and Gwen Graham were once allies. Here’s how they became rivals.