Gov. Rick Scott's office and a health care provider are locked in a dispute over public records and whether the vendor would end its legal battles against Scott's office if the state would extend its contract.

Scott's office says yes. The vendor's lawyer says no. The relevant email traffic is below.

AIDS Healthcare Foundation (AHF), a South Florida nonprofit, had a six-year, competitively bid contract to treat AIDS and HIV patients. The state did not renew AHF's contract and the company has filed a formal protest, which is pending before an administrative law judge in Tallahassee.

AHF is represented by Tallahassee lawyer Ryan Andrews, who recently won a lawsuit after demanding three months' worth of Scott's schedule records, including all upcoming U.S. Senate campaign appearances through Oct. 31. Circuit Judge Charles Dodson ordered the documents to be made public by Monday.

Scott's office, which has clashed in the past with Andrews' law firm, claims the vendor proposed ending its litigation in return for state business.

"The email speaks for itself. They offered to drop the public records lawsuit and withdraw the requests IF they received a contract from AHCA (the state Medicaid agency, the Agency for Healthcare Administration)," said Mara Gambineri, a spokesman for Scott.

Not true, Andrews says. His client "made a proposal to settle all litigation between itself and the state … It's sad but not surprising that the Executive Office of the Governor chose to mischaracterize these routine settlement discussions to try to save face after Judge Dodson rebuked (Scott's office) in a written order involving its failure to provide public records."

Below is an email Andrews sent on Aug. 22 to Scott's lawyer, Barry Richard of Greenberg Traurig in Tallahassee, which includes the AIDS Healthcare Foundation's one-year contract proposal to resolve the litigation. (The acronym PRR refers to public records request).

The yellow highlights were provided by the governor’s office. EOG is shorthand for Executive Office of the Governor. 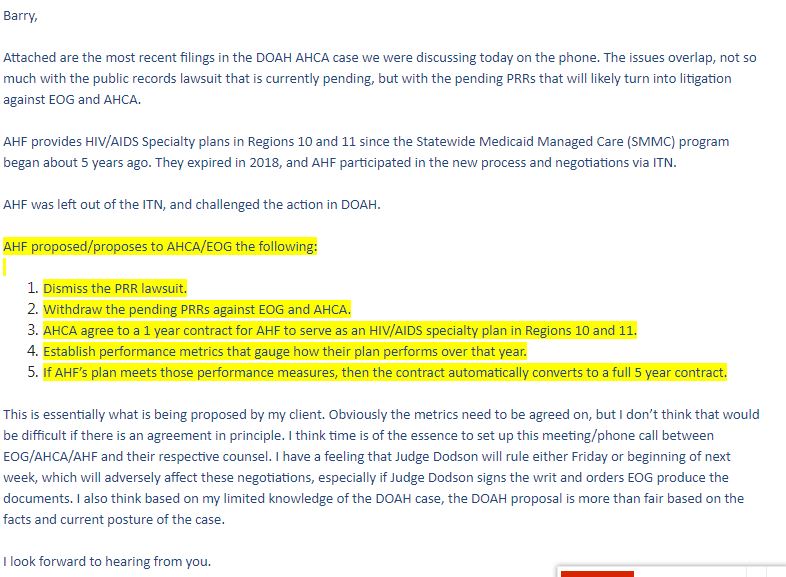 Andrews said the decision by Scott's office to release the above email, marked as privileged attorney-client information, was not consistent with the Florida evidence code. Scott's office, which has been accused on many occasions of a lack of transparency, said the email is a public record.