The Times/Herald reviewed the voter registration rolls of the top 21 Florida counties, which represents 80 percent of the state's voting population. It found that nearly 22,000 lost their right to vote because they were convicted of a felony. If Amendment 4 passes on Tuesday, the majority of them would have their voting rights restored automatically.
By
Published Nov. 2, 2018|Updated Nov. 2, 2018

TALLAHASSEE — Democratic and black voters are far more likely to have lost their right to vote because of a felony conviction than Republicans and whites, according to a Tampa Bay Times/Miami Herald analysis.

If Amendment 4 is approved by more than 60 percent of voters on Tuesday, most felons will automatically be able to register to vote after completing all terms of their sentences. An estimated 1.2 million people who currently can't vote would be affected by the change. Those who committed murder or sex crimes are not eligible.

Any significant change in the makeup of the electorate would upend politics in a state with a recent history of extraordinarily close races. Rick Scott beat Alex Sink for governor eight years ago by a mere 61,550 votes. Four years ago, Scott won reelection over Charlie Crist by 64,145 votes.

Donald Trump won Florida over Hillary Clinton two years ago by 112,911 votes, securing him the presidency.

The Times/Herald reviewed voter registration records in the 21 most populous counties, which represents a sample size of 80 percent of Florida's voting population. In those counties, nearly 22,000 people lost the right to vote because of a conviction last year alone.

For those denied rights because of a past conviction, it can feel debilitating.

"This process has got me stuck. I can't vote," said Stephen Graham of Fort Lauderdale, a black Democrat who served a year on probation after a 2011 drug conviction. "It's not right."

More than half of those who lost their voting rights, 52 percent, were Democrats like Graham and another 33 percent were independents with no party affiliation. Only 14 percent were Republicans.

By comparison, Democrats make up 37 percent of all voters in Florida, Republicans make up 35 percent and most of the rest have no party affiliation. Florida has 13.3 million voters.

In total, more black voters were removed than whites, even though black voters make up 13 percent of the Florida electorate.

"You just can't explain these numbers based on some mystical theory that there's no racial bias involved," said Darryl Paulson, a retired political scientist at USF St. Petersburg who has studied voting rights issues for decades in Florida and has been an expert witness in Florida cases.

Paulson was a Republican for most of his life. But he switched to no party affiliation six months ago in part, he said, because of Republican opposition to allowing felons to regain voting rights upon completion of their sentences.

"I can't abide a party that turns its head in another direction and pretends that racism does not exist," Paulson said. "It's one of the most terrible processes this state has ever invented."

The Times/Herald asked election supervisors from the 21 top counties for lists of felons removed from the rolls in 2017, including names, dates of birth, race, gender and political party, all of it public information. It then calculated removals rates for each groups by comparing revocations to registrations by party and race. 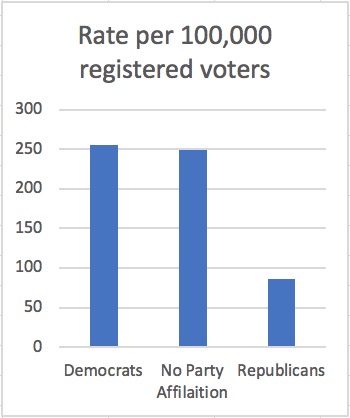 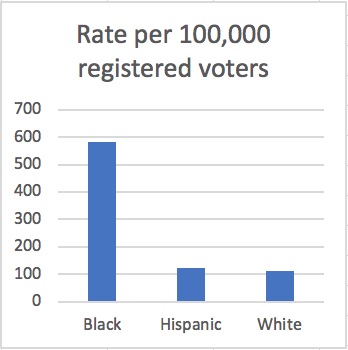 A Florida voter can become ineligible for a variety of reasons: death, mental incapacity, relocation, voluntary removal from the rolls or a felony conviction. Counties are required by law to remove convicted felons from the rolls after they are notified and offered hearings, based on state law enforcement records.

The American Civil Liberties Union, a leading supporter of Amendment 4, says the system must change.

"Our focus has been a moral principle: We can't have a democracy with permanent second-class citizens," said Howard Simon, the ACLU's Florida director.

The five counties with the most felons who left the rolls in 2017 were Broward, Orange, Miami-Dade, Hillsborough and Pinellas. All except Pinellas are Democratic-leaning counties.

Florida's controversial system of stripping the voting rights of an estimated 1.5 million felons is controlled by four Republicans in the nation's largest and most decisive swing state, a place with a long history of close statewide elections.

A felon who loses the right to vote must wait five years before applying for restoration of that right under a system approved by Gov. Rick Scott and three elected Republican Cabinet members in 2011.

Many felons never try. The clemency process often takes years. Under Scott, about 3,000 cases have been heard in eight years. A backlog of more than 10,000 requests is pending.

The Palm Beach Post has reported that during Scott's two terms in office, he voted to restore the right to vote to twice as many white people as black people, and to three times as many white men as black men.

The Post found that Scott, a Republican, restored voting rights to the highest percentage of Republican felons and the lowest percentage of Democrats of any governor since 1971. The newspaper said it verified the race and party affiliations of about half of those who regained the right to vote under Scott.

Florida's system has been under attack in the courts and by nearly a million citizens, all of them voters, who signed petitions to force a statewide referendum, Amendment 4, on the November ballot.

But any change would come too late for Graham, 48, an electrician who is among those who can't vote in this election.

Graham's crime, possession of more than 20 grams of cannabis, is a third-degree felony. After the Lauderhill police arrested him, his bond was set at $1,000, and he got a year of probation with no prison time.

"I got caught with marijuana," Graham said in an interview. "I did a year of probation and this was more than four years ago. I've been clean, but I couldn't vote in the (2016) presidential election."

Walter James, 75, of Pensacola, a Democrat who lost his right to vote last year, said he has led an exemplary life since his last crime more than 20 years ago. Beginning in his 20s, he faced charges such as gambling and aggravated assault on a police officer. James' last conviction was in 1992, according to the Escambia County elections office.

He said he pays taxes like everyone else and is expected to report for jury duty when called (jurors are drawn from lists of driver's licenses, not voter rolls).

"I pay taxes. I'm a U.S. citizen. I've served in the military. I got an honorable discharge," James said. "Why shouldn't my rights be restored?"

Up next:Florida attorney general election between Sean Shaw, Ashley Moody: What you need to know