“Despite running a good campaign, Rick Scott can’t overcome Andrew Gillum’s phenomenal campaign,” said a Republican. “Senator Nelson holds on to Gillum’s coattails for a squeaker of a victory. Whatever the outcome Tuesday, Florida will remain a toss up in 2020. Start building your Florida infrastructure now President Trump! “

These Insider Polls reflect the conventional wisdom of Florida's political establishment – campaign consultants, lobbyists, fundraisers, activists, political scientists – rather than reality. In fact, with respect to our Insiders, they are often wrong. Presidents Hillary Clinton and Jeb Bush and Democratic gubernatorial nominee Gwen Graham can attest to to that, as those were the Insiders' predictions in '16 and '18.

Asked if Republicans and Democrats nominated their strongest primary choice, Democrats were evenly split and Republicans almost unanimous that DeSantis was not the strongest nominee. He trounced Agriculture Commissioner Adam Putnam in the GOP primary thanks in large part to support from President Trump.

"DeSantis ran the worst campaign I've seen. Poor messaging, little inspiration, offered no compelling reason to vote for him," a Republican said. "He failed to tell a story. He will win by the tightest of margins – a sliver – despite his poorly run campaign."

"If Gillum wins I blame Trump," another Republican said. "Only reason why this Governor's Race is so close is because Trump endorsed DeSantis in the primary.  Putnam would have had lead and not need Trump to travel to FL to rally (rescue) the base when we should be winning NPAs at this stage.

"I have no doubt we would not see a Blue wave in a Florida had Adam been their nominee," said a Democrat.

We allow our Insiders to weigh in anonymously to encourage honest answers. Many of those surveyed are working for the campaigns in question. More than 47 percent of the Insiders in this survey are registered Republicans and nearly  44 percent Democratic.

Nearly two thirds of the Insiders pegged DeSantis as running the worst campaign in the gubernatorial and senate races. Nearly one third said Nelson.

"DeSantis allowed Gillum to introduce himself before he was attacked. To win, you have to stand for something and show backbone. Gillum did that and DeSantis did not," said a Democrat. 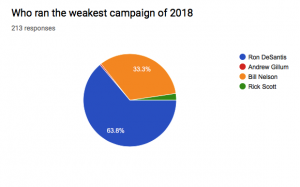 The Insiders overwhelmingly expect Republicans to win the races for chief financial officer, and attorney general — but nearly two thirds think Democrat Nikki Fried will be the next commissioner of agriculture and consumer services.

The Insiders in this survey included: