And then they fell back down the next day.
By Langston Taylor
Published Jan. 10, 2019

Or, more accurately, Tampa Bay treated Tuesday like it was a business day in September or October just weeks before a presidential election.

Hillsborough and Pinellas counties processed a combined 872 applications to register to vote on the day, the first day Amendment 4 expanded voting rights access to most felons who had completed their sentences.

You can look at that number in two ways. In one way, it’s tiny: There are likely more than 130,000 people who just gained their right to vote in those counties, according to a Times analysis.

In another way, it’s enormous. There is no general election in 2019, and off-years rarely see a day where more than a few hundred people register to vote in the region.

For a non-election year, voter registration numbers on the first day of Amendment 4 were astronomic.

Registration dates for registered voters in Pinellas and Hillsborough counties since 2000. 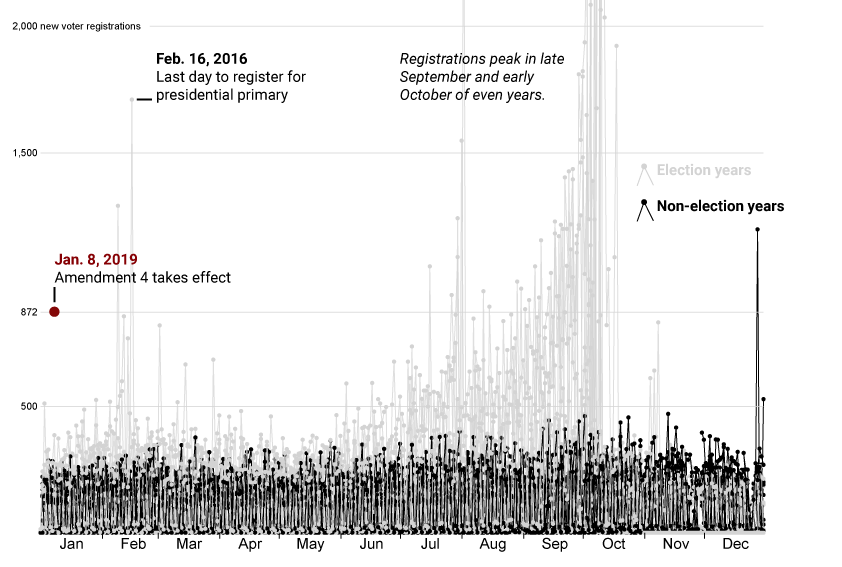 “We’ve been steadily busy with people walking in to register to vote all throughout the day, and expressing a lot of excitement to have this opportunity,” Hillsborough Supervisor of Elections spokesman Gerri Kramer said Tuesday evening.

The county received 434 applications Tuesday. For perspective, that’s more than two-thirds as many registrations as they received in the entire month of January 2018 (an election year).

Voters expressed pride and excitement and showed up to county offices early in the morning.

But that excitement apparently faded fast. On Wednesday, just 78 people applied to register to vote in Hillsborough. Another 164 did in Pinellas.

Desmond Meade, president of the Florida Rights Restoration Coalition, told reporters Monday that registering a large portion of the newly eligible electorate would be a “huge undertaking.”